Brand-new survey data reveals that a majority of Israeli pain specialists find cannabis to be a safe and effective painkiller.

The data, published in the Journal of Pain Research, was compiled by polling more than half of all practicing pain specialists in Israel, a country that has legalized the prescription of cannabis for most of the past decade.

The authors state that almost all of the survey respondents endorse cannabis to their patients, while 56% admitted that cannabis has “mild or no” harmful side effects. Meanwhile, 45% of respondents said that “they themselves would prefer to be treated with cannabis rather than opiates in case of chronic pain.”

The authors concluded, “In the current survey, which probed the attitudes, beliefs, knowledge, and collected experience of pain specialists using cannabis in their daily practice, cannabis emerges as an effective treatment option for many patients with chronic pain who have failed previous treatments. Moreover, their responses arguably present a possible change of paradigm and the possibility to consider cannabis earlier in the course of the disease, and not as a last resort.”

The conclusion of the study is important, considering that many doctors especially in the USA are still wary of recommending cannabis for a wide range of illnesses unless a patient hasn’t responded to all other kinds of conventional medications. It is also especially significant that the doctors themselves walk the talk, stating that they would like to use cannabis instead of opiates should they have chronic pain.

For many years now, Israel has been at the forefront of cannabis research, with scientists, doctors, and a government that is progressive when it comes to medicinal cannabis use.

In December 2017, another Israeli report was released wherein researchers looked at the effects of cannabis on pain patients over the course of 12 months. The study, conducted by a nurse named Joshua Aviram from the Rambam Hospital, analyzed how cannabis impacted patients suffering from pain caused by different ailments.

Aviram, a doctoral student in the Department of Nursing at the University of Haifa, conducted the study under the guidance of Professors Dorit Pod and Alon Eisenberg. They studied a total of 1,205 patients aged 18 to 95, all of whom suffered from various kinds of pain. The respondents volunteered to answer a questionnaire at certain intervals during the year, as well as follow-up questionnaires a month up to 9 months after cannabis treatment ended.

The findings were placed onto a graph as seen here: 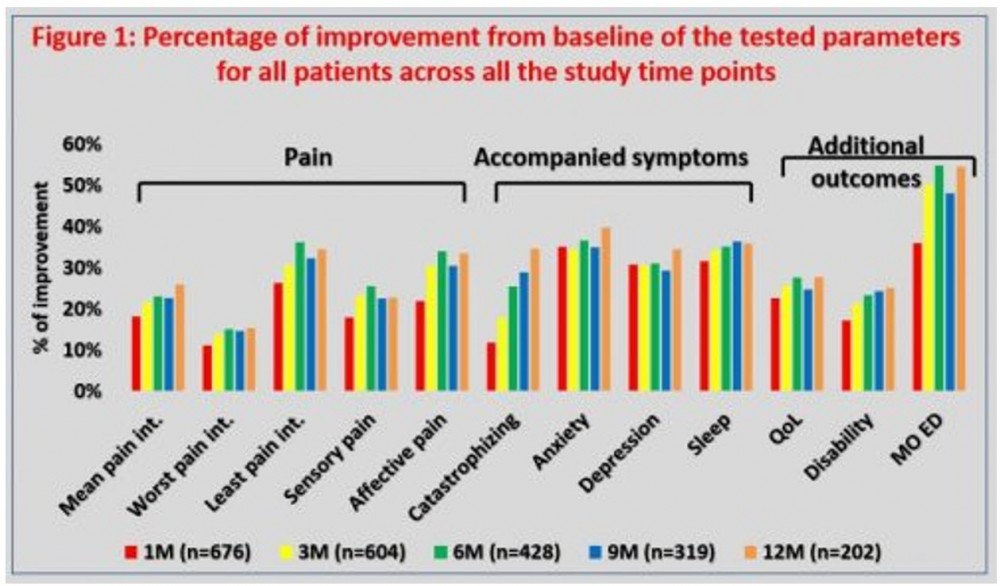 As you can see with the data, there is a steady improvement in virtually all parameters set out by the scientists including pain problems, anxiety, depression, and sleep.

“All the parameters improved after one month of treatment and continued to improve later,” writes the study results. “The main improvement was found between filling out the baseline questionnaire and the follow-up questionnaire a month later.”

We will never, ever sell your email address or use it for anything else other than our newsletter.